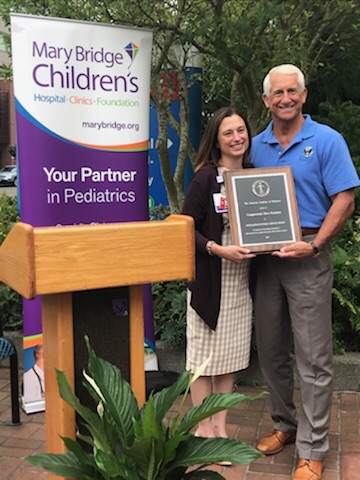 On August 2, I was honored to present Congressman Dave Reichert with the American Academy of Pediatrics’ Excellence in Public Service Award (EPSA). Representing 67,000 pediatricians across the country, The American Academy of Pediatrics is committed to optimizing the physical, mental and social health and well-being for all children.​ A key element to fulfill this mission is legislative advocacy. Nationally, the Academy has been vocal in the fight to protect children’s access to health care, to reduce child poverty and hunger and to promote child safety. Our efforts also extend abroad to include global child health with an emphasis on high quality, high impact maternal, newborn and child health interventions. Our own Washington Chapter of the AAP achieved outstanding legislative successes this year, including the establishment of an Apple Health referral phone line for behavioral health and an increase in reimbursement for Apple Health for Kids. The collective voices of Chapter members, like myself, have helped achieve these legislative successes by forming relationships with our legislators. Indeed, that is how I came to meet Dave Reichert, through my involvement with the Chapter. This Excellence in Public Service award is particularly meaningful, as Rep. Reichert is completing his seventh and final term as representative of the 8th congressional district, MY district.

It is a testament to Rep. Reichert’s long commitment to children’s health and well-being that he chose Mary Bridge Children’s Hospital as the site for the award presentation. Mary Bridge is a safety net hospital. Our hospital, ER, urgent care centers and clinics serve some of the most diverse and vulnerable little residents in a wide catchment area, from Gray’s Harbor to Wenatchee, Seattle to Chehalis. So we particularly value child health champions in state and federal government.

Rep. Reichert has long been a just such a champion. His efforts stretch from the global to the local. He Is a lead sponsor of the Reach Every Mother and Child Act of 2017, which has 168 sponsors and directs USAID to implement a strategic approach for providing foreign assistance in order to end preventable child and maternal deaths globally within a generation. He led efforts requesting support for Fiscal Year 2019 funding for maternal and child health (MCH), immunizations, and nutrition at USAID.  One hundred fifty-three (153) Members of Congress signed on, and the appropriations bill which passed the House increases maternal-child health funding by $15 million, increases nutrition funding by $20 million, and preserves immunization funding. Rep. Reichert also sought support for Fiscal Year 2019 funding for the eradication of polio.  Additionally, he led a bipartisan letter to the Administrator of USAID to support early childhood development through all of its child-centered programs, including a new U.S. Strategy for Children in Diversity that USAID is currently developing.  USAID staff have told the Academy that this letter has made it easier for them to draft a strong strategy.

Rep. Reichert’s efforts are felt locally as well. As a co-founder of the Congressional Child Health Care Caucus he has fought to preserve access to healthcare, including voting against ACA repeal, as he told me personally, out of a concern that repeal would harm children and families in his district and across the country. He penned the Emergency Medical Services for Children amendment, which helped states and safety net hospitals like Mary Bridge provide high quality, evidence-based care for kids. He was a strong supporter of CHIP reauthorization as well as extending funding to community health clinics, like those affiliated with Multicare, and more than doubling their funding for residency education. He also serves on the board of the Special Olympics of Washington State.

It is in recognition of these achievements that I was proud, as a member of the American Academy of Pediatrics, a Mary Bridge hospitalist and a constituent, to present the Academy’s Excellence in Public Service Award to my own district representative, Congressman Dave Reichert. Approved by the AAP Board of Directors, this award represents the highest honor awarded by the Academy to a public servant for distinguished service to the nation’s infants, children, adolescents, and young adults. In receiving this award, Rep Reichert joins a distinguished group of past awardees including Former First Lady Michelle Obama, Senator Edward Kennedy, and Senator Orrin Hatch.

“The American Academy of Pediatrics presents to Congressman David Reichert, its Excellence in Public Service Award in acknowledgement of outstanding contributions to public policy for improving the quality of life of America’s children.”