After participating in WCAAP Advocacy Day in Olympia for the past two years, I was inspired to attend the 2018 AAP Legislative Conference in Washington, DC in April.  The conference’s content was varied, interesting and fun.  It consisted of two days of didactic and interactive programs followed by a day of lobbying Congress.  Our lobbying efforts centered around gun violence, asking for money for the CDC to study gun violence and asking for support of bills that either raised the minimum age to buy an assault weapon to 21 years or banned assault weapons outright. 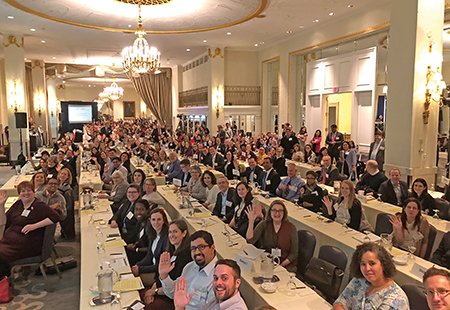 During the conference we heard from fellow pediatricians who had used grassroots methods to promote the well-being of children in their communities and states.  We did role-playing games to help us understand the working lives of our Representatives.  We heard the latest “inside the Beltway” news from lobbying consultants and we had experts explain the current legislative issues that could have big impacts on the health of our patients.  On Tuesday, April 10 we went to Capitol Hill, to lobby legislators on the three gun violence topics mentioned above.  We were joined on the Hill by leaders from all the AAP chapters around the country so that in the end over 350 pediatricians, pediatric subspecialists, pediatric surgical specialists and pediatric trainees lobbied Congress.  Our Washington Delegation consisted of eleven people from both sides of the Cascades.  We met with aides for Sens. Patty Murray and Maria Cantwell as well as several of the State’s Representatives.  The Senators’ aides as well as the aide for my Representative (Suzan DelBene) were very receptive and supportive but also honest and realistic about the political climate in Washington.  This contrasted with the reception some of my colleagues from other states received.  It made me grateful to have Legislators who recognize that the safety of children is an important matter of public policy.

Being with so many Pediatricians who are working with the single purpose of making life safer for children was incredibly inspirational.  Armed with the knowledge and the tools I learned at this conference, I am ready for WCAAP Advocacy Day 2019!

*Editor’s note: Registration is now open for the 2019 WCAAP Advocacy Day! We hope you will join us!